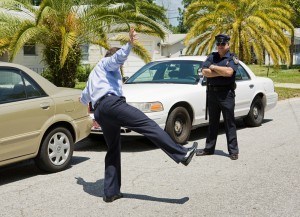 In Florida, when a police officer suspects that you might be driving under the influence of drugs or alcohol, he can require you to take three tests – known as Standardized Field Sobriety Tests, or SFSTs – to help him to determine whether you are too impaired to drive. Each test must be administered under acceptable conditions to be considered valid, and the officer's conclusions may be challenged if the tests are performed incorrectly.

Knowing the requirements of these tests may help you decide how to proceed if you are charged with a DUI.

Nystagmus is the involuntary jerking of the eye when it's under strain. In sober people, some jerking is normal when the eyes look too far to the right or the left. The eyes of Intoxicated people often exhibit more distinct jerking and at earlier angles.

The HGN test begins with an officer instructing the driver to keep his face forward while his eyes follow a pen, finger, or other object side to side. Officers then watch for nystagmus in three different ways, with two points possible for each:

The officer totals up the points awarded, assigning a score out of six. A score of 3 and above is likely to result in an arrest unless the other tests indicate the driver is likely sober.

The Walk and Turn test is, perhaps, the most well-known of the SFSTs. The straight line, the nine heel-to-toe steps, the pivot turn, and the journey back are well-documented in film and personal anecdotes, and most of us can probably duplicate the test in part. What officers are looking for, however, is any slight deviation from their very specific instructions. Points on this test are given for the following eight errors:

Each error counts as one point, for a total of eight possible. Scores of 4 and above are likely to result in arrest, depending on the other scores.

The One Leg Stand test, just as it sounds, requires the driver to stand on one leg for approximately 30 seconds while keeping his arms to his sides and his other leg 6 inches in the air. Like the Walk and Turn test, the points are counted not just for the ability to do the basic test, but for the driver's ability to follow detailed instructions while balancing on one leg. Points are counted for the following:

On this test, if only two points are given, the officer generally will arrest the driver for further testing. Even if only one point is earned, the officer will factor in all three scores, which are recorded on the police report.

If you have been charged with a DUI, it is important to retain competent legal counsel who can scrutinize your field sobriety testing and challenge any test which was incorrectly performed. In South Florida, Lloyd H. Golburgh has the experience you need on your side. Contact us today for a consultation.